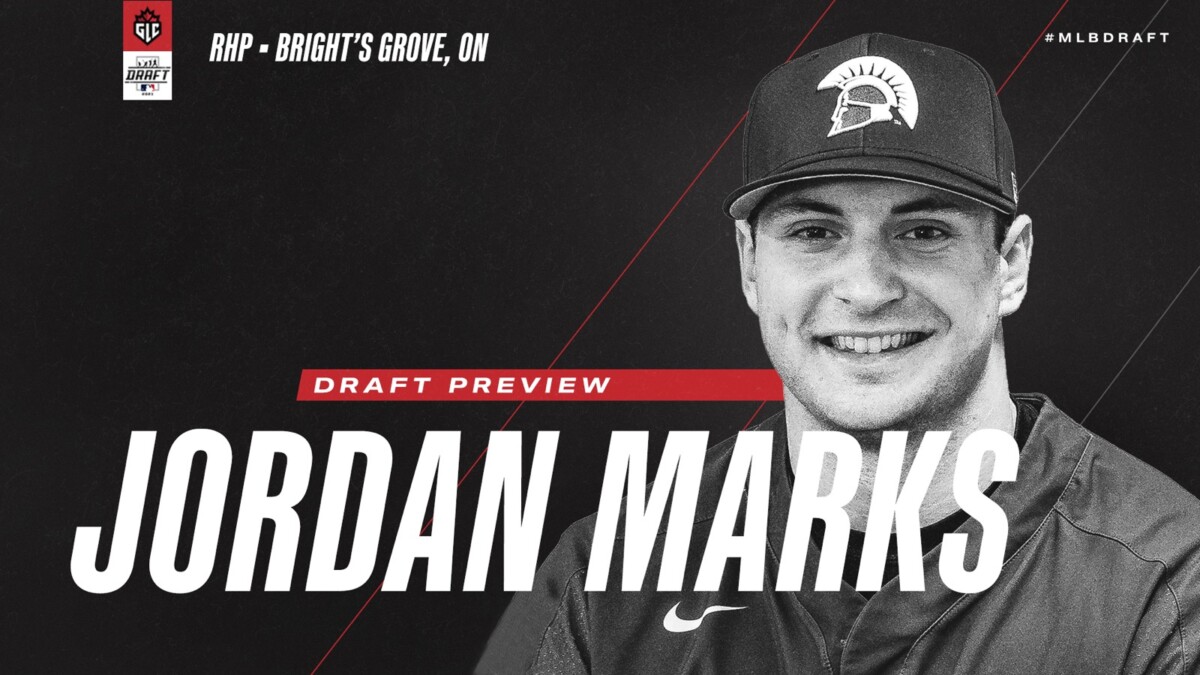 We are only a few days away from one of the most prestigious occasions on the baseball calendar, the MLB Draft. It's the pinnacle for amateur players; it's the first step in the quest to play in the big leagues. For Great Lake Canadian players past and present, particularly GLC alumni Jordan Marks and current GLC pitcher Calvin Ziegler, it's a day they've dreamt about for quite some time.

For Marks, this year has been unlike any other. After putting up a 2.54 earned run average and striking out 101 batters in 95.2 innings for USC-Upstate this past season, the junior right-hander jumped onto the scene as a legitimate draft prospect.

"I kind of got a little glimpse of the draft experience last year in the COVID-shortened Draft,” said Marks. “But this year has been a whole different experience – fielding a lot of calls, talking with scouts, answering questions and so on. Just keeping my phone close to me at all times.

“I think right now, I'll be glad when it's all over and I can get back to playing baseball. But I'll probably look back at this unique experience and be pretty fortunate to have gone through it.”

Marks’ continued development doesn't surprise anyone who coached him during his tenure with GLC, which began in 15U. "His work ethic and drive to get better is a model for kids in our program still today," said GLC Pitching Coordinator and former Blue Jays farmhand Shane Davis.

"You knew exactly what you were going to get each outing and that was a competitor that gave everything he had until his outing was over. He didn't make excuses when things didn't go his way and battled through rough outings, which is all you can ask for."

Marks developed through GLC's system as a strike-thrower with the ability to pitch first and foremost, while velocity came later. Davis describes Marks' progression as the "ideal way for a pitcher to develop."

“Now that he has velocity, it's the best combination of a guy that knows how to pitch, filling up the strike zone with velocity and can overpower a hitter when he needs to."

As the Draft creeps closer and closer and Marks' dream looks to become a reality, the Sarnia, Ontario native anticipates it being an emotional moment when he gets the call.

"Anything can happen on draft day. Obviously, the moment I hear my name called will be very gratifying,” Marks expressed. “I think it'll be hard to hold back my emotions. I've had a lot of people make sacrifices for me along the road. I'm thankful and grateful for all of those people that have helped and supported me. A lot of late nights and early mornings, but it'll be a rewarding moment for sure."

Meanwhile, in Heidelberg, Ontario, right-hander Calvin Ziegler awaits the Draft. The 18-year-old right-hander, who has been a known commodity for a while, is relatively calm ahead of one of the biggest days of his life.

"Heading into the draft, I am honestly clear minded trying not to get too excited cause anything can happen," said Ziegler. "Going through the process is very exciting, getting to talk to all the scouts to hear what they say is great to see that the hard work has been paying off."

Since joining GLC, Ziegler has evolved as a pitcher significantly. The right-hander stated, "I've gotten a better feel for who I am as a pitcher, getting a better feel for my pitches and developing better pitches overall. Also, I have grasped a bit of what it's like to be in pro ball from our coaching staff."

His evolution as a pitcher has occurred under the tutelage of Pitching Coordinator Jon Fitzsimmons, who's seen him grow from a hard thrower into a refined pitcher with power stuff.

"After working through our program, he developed some much needed body control and an understanding of when to accelerate his arm and body in order to keep his fastball in the strike zone,” Fitzsimmons said. “He also developed an above-average changeup which turned into a bit of a weapon for him last season.”

Fitzsimmons, a former professional player himself, preached the importance of work ethic and competitiveness at the next level, which Ziegler possesses to the nth degree.

"Cal's work ethic is what will carry him to the top,” Fitzsimmons continued. “He has the energy and the discipline to work every day on his body and technique.”

"He's not just willing to put the work in, he enjoys it. That's what will separate him at the next level."

GLC left-hander Adam Shoemaker and alumni Eric Cerantola and Max Wright are also in consideration for the upcoming Draft. Shoemaker recently topped out at 95 in-game and sat in the low 90's. Meanwhile, Cerantola opened eyes recently at the MLB Draft Combine, showcasing his elite arm and power curveball. And Wright, a graduating senior at Indiana State, finished his college season with a .305 batting average and 16 home runs.

The Draft will be an exciting one for the Great Lake Canadians organization, as players past and present will realize their dream.