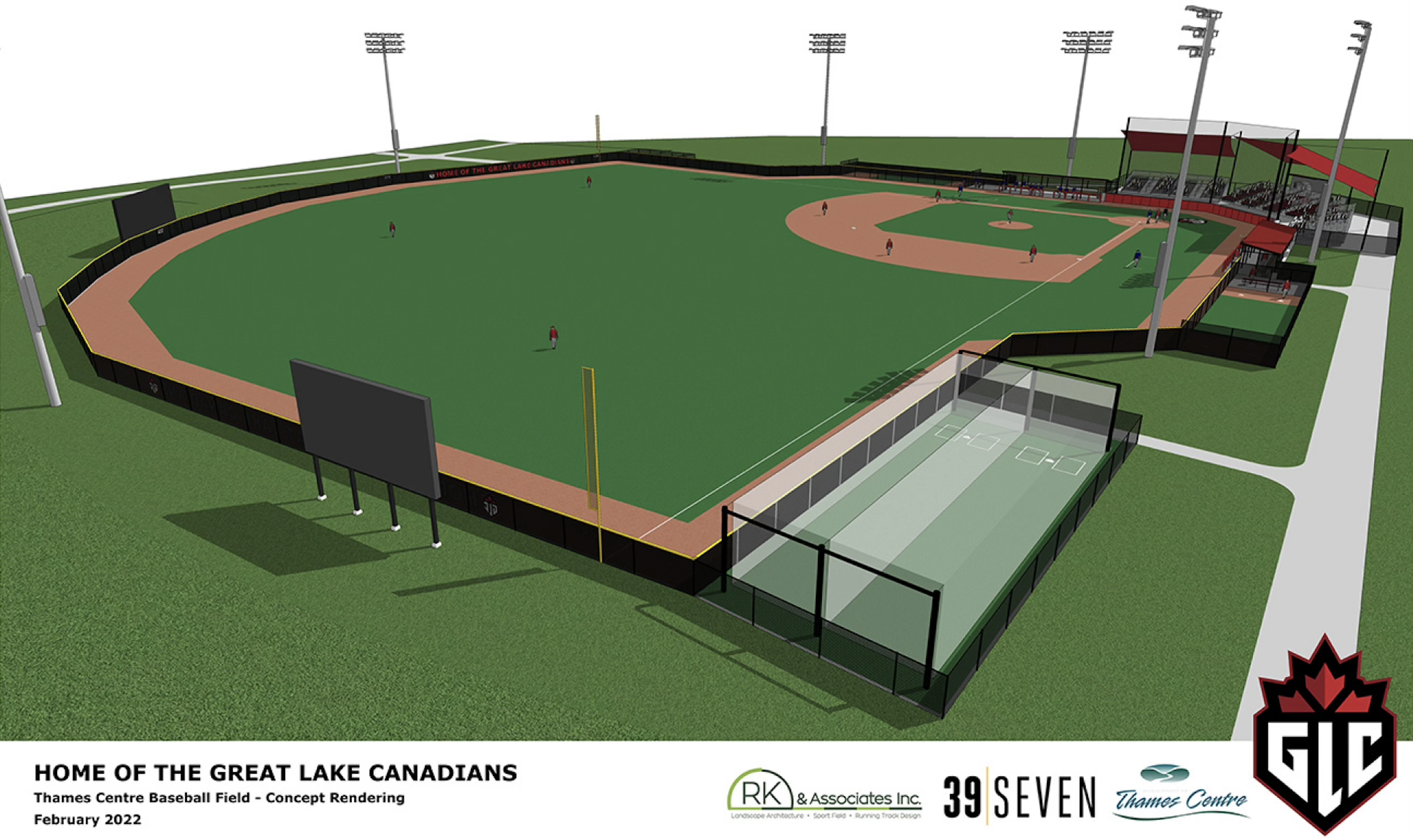 We are thrilled to publicly announce the news of a brand-new state-of-the-art baseball stadium at GLCs home complex in Thames Centre at Dorchester's Field of Dreams.

The cutting-edge venue will be built directly across from the current field where GLC players have played since 2013. The stadium will be ready for game action in the middle of July, bolstering what is already a premier complex in the province.

The ballpark will hold 400 seats, 100 of which will be VIP chair backs, dugouts that are 50 feet in length, an extensive batter's eye, a full turfed batting tunnel, two full turfed bullpens, with hopes for a number of additional amenities dependent on funds raised.

Thanks to the Toronto Blue Jays' continued support for the growth of baseball in Canada, GLC players will be competing on the same turf as Blue Jays players had previously. To honour the Blue Jays' involvement and to make the facility even more unique, the field dimensions will mirror that of the Rogers Centre.

The Blue Jays' turf will allow for longer seasons with fewer rainouts, a luxury hard to come by within the province. The ability to play more games further enhances the development opportunities for GLC players. Meanwhile, GLCs branding will be present behind the plate and on the outfield fencing. The stadium will truly feel like home for the organization's players.

The arrival of a second field at the same complex as GLCs current field will be a massive asset for developing players throughout the organization while continuing to foster a shared culture from top-to-bottom.

This could not be possible without the support of Thames Centre and the strong relationships built. We believe this is a relationship that has been built by all of our staff, our current players and families along with all of our alumni and families.

Director of Baseball Operations, Chris Robinson stated, "this is a facility that current and future classes of GLC players will get to use but the relationship with Thames Centre that allows us to partner on projects of this magnitude has been built for years. GLC staff and families have taken pride in this facility since our inception, and now it will be somewhere for our alumni to come back to and see what they have helped build.

With an accomplished coaching staff that has over 60 years of collective professional playing experience, a first-class indoor training facility and a brand-new state-of-the-art baseball stadium, GLC offers an unmatched experience and development opportunity for amateur baseball players in Canada.